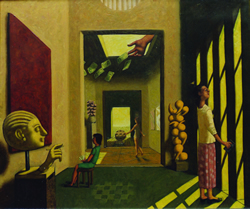 A 24-page exhibition catalogue is available with an essay by Robert Boyers, Tisch Professor of Arts & Letters, English Department, Skidmore College. This exhibition was supported by the Office of Special Programs and Salmagundi magazine.

An excerpt from Boyers’ essay follows:
The Yugoslav painter Vojislav Stanic was born in Podgorica, Montenegro in 1924 and has long been regarded in his own country as a major painter. A retrospective of his work was the sole exhibition in the Yugoslav pavilion at the 1997 Venice Biennale, no doubt the high point in the career of an artist whose works have mainly been shown in his own country, and in the United States for the first time in the summer of 2004.

Stanic is a painter of considerable range. In early works he can seem almost like an old-fashioned easel painter with a varied bag of devices borrowed from the entire history of art. More often he paints like a surrealist with an ambivalent allegiance to Magritte and to other eccentric artists, from Bosch to Miro. A figurative painter with an old master’s command of structure and design, he is an artist committed to whimsical but affecting depictions of the ordinary lives of ordinary people in and around his own small city. Stanic’s paintings offer glimpses of what is apparently a familiar, habitual landscape. People are captured at their games, at their televisions, in various postures of recreation or worship or distraction. Lovers are glimpsed, or studied, through open windows, in parks, often at the edge of some larger spectacle or public event. The mood of the paintings is characteristically optimistic, even cheerful. Typically, grim or solemn things are made to seem incidental, the stuff of an occasional nightmare that will pass. In fact, Stanic is so much at home with both the ordinary and the marvelous that the eruption into his work of the political during the Bosnian war seemed remarkable and chilling. The paintings in this retrospective exhibition demonstrate the full variety of the painter's imagination.

The paintings of Vojislav Stanic are originals in every sense of that much abused term, and powerfully affecting in combining the political and the intimate, formalism and freedom, whim and melancholy, the sumptuous and the "scrapbook," enigma and clarity, subversive irony and generosity of emotion. At eighty, Stanic deserves to win the large international audience that has thus far eluded him.