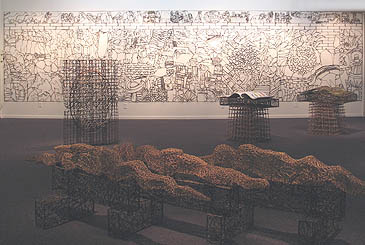 John McQueen is internationally known for his sculptural work, which primarily uses carefully tied sticks and other natural materials to form three-dimensional constructions or wall images. Some contain elements of poetic wordplay including palindromes, rebuses, and anagrams. McQueen's conceptually driven and often thought-provoking or humorous work stems from that of a basket maker. He has influenced the fine craft scene and broken its boundaries for more than 30 years. His work has been exhibited in several of the country's most prestigious museums and galleries, including the Renwick Gallery in Washington, D.C. (1992); and the Racine Art Museum, Racine, WI (2004). His works are in the collections of the Cooper-Hewitt National Design Museum, Smithsonian Institution, New York, NY; the Philadelphia Museum of Art, Philadelphia, PA; the American Craft Museum, New York, NY; and the Seattle Art Museum, Seattle, WA, among others. "A basket is egocentric and imprisoning; it holds tenaciously to its limits. It has its own organization and regulates its definition closely. By insisting on being a basket, it keeps itself confined. Let other objects try for art. A basket is isolated, unique, separate from all but itself. Such defenses are tightly held. Uncertainty, movement, fear of being spread out is guarded against. The open object, the object of art, leads to a larger reality. The basket must reject this even when inside, it secretly entertains it. These secrets lead to hero worship and flights of fantasy. A basket must be careful. In such a state, it could become raveled."