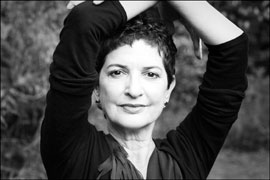 A brilliant artist, dedicated colleague, and beloved friend, Debra J. Fernandez came to Skidmore College in 1990. Her academic career was marked by promotion to full professor in 2006; and from 2012 – 2017 she was appointed Porter Chair to honor creative contributions to the Dance Department and to the College. Debra’s work as an artist/scholar is both broad and deep. She has composed musical works for chamber ensembles as well as choreographed over seventy unique dances which have been presented throughout New York and beyond at such diverse venues as The Yard, P.S.122, the Frances Tang Teaching Museum, and the Hyde Collection. A comprehensive view of Debra’s career reveals a beautifully woven tapestry which parallels her work as an artist — contemplative, eloquent, and profound.

Following her graduation from the University of South Florida in 1974, Debra was invited by New York City Ballet (NYCB) choreographer Todd Bolender to work with him in Istanbul, Turkey, in his national ballet company. Subsequently she spent twelve years in NYC honing her craft in dance and music, including work in commercials and film. In 1990 she moved to Saratoga Springs to join the Skidmore dance faculty, where she helped create the current structure of the Dance Department, the form in which it continues to thrive today. She envisioned and implemented a curriculum for Choreography in Dance, expertly guiding countless students through this coursework — many of whom continue in her footsteps now as professionals. An inherent educator, Debra’s investment in both student and faculty learning has always been a priority throughout her career. Her legacy within the department is vast, yet the impact she has made through this one curricular development of Choreography may be the most lasting among her pedagogical accomplishments.

In addition to teaching Choreography 1 and 2, Debra has taught all four levels of ballet technique, three levels of Jazz, and Music for Dancers. She developed new courses such as Performance Elements, a Yoga based course to enrich the performance of dancers and actors; Jazz and Ballet in Contemporary Performance Workshops; and Jazz Intensive, a unique Summer 6- week program offered through Skidmore Special Programs.

Debra’s artistry is a complex mix of curiosity, humanity, irony and risk-taking. She gently guides students and artists to inhabit new spaces and express new dimensions. Her work stretches far and wide and is demonstrated by scholarship that includes many dance genres as well as experimental and traditional theater and opera. In 1994 Debra was invited to work at the Williamstown Theater Festival as a movement instructor and choreographer, a relationship which continued for seven years. Further collaborations with artists from the festival led to performances at The Virginia Opera, The Belgrade International Theater Festival and the Hysterical Ontological Theater in NYC, to name only a few. The Virginia Opera’s production of Orfeo and Eurydice was described by The Richmond, Virginia Times-Dispatch as “…a dreamy, almost hallucinatory conception…”. She has indeed received accolades for her interdisciplinary spirit and ability to cull the essence of a theme and develop artistic expression around it. Debra is at the top of her field as a master choreographer and collaborator.

From its inception in 2000, Debra was invited to establish a relationship with the space and concept of the Frances Young Teaching Museum. In fact, since its opening, she has created five evening-length works focused specifically on the Tang as interactive performance space. TangO, a collaboration with David Porter and Margo Mensing, centered around a live performance of John Cage’s “Sonatas and Interludes for Prepared Piano.” It was commissioned for the grand opening. In 2002 she created Balls, named as one of the “year’s ten best” by Metroland and described as an “unabridged thesaurus” of dance, “compelling, odd and beautiful.” Her second collaboration with David Porter and Margo Mensing in 2004 is entitled Mak 3; it was an evening of dance, theater, music, art, and film constructed and created to illuminate the live performance of George Crumb’s masterwork, “Makrokosmos III.”

Debra has also solidified a lasting relationship with the Arthur Zankel Music Center during her tenure at Skidmore. Most notable is her choreography of Swan Song in 2010 to a score by Richard Danielpour. In October of 2012 Swan Song was presented again as a part of Saratoga Dances II, curated by Justin Peck, dancer and now resident choreographer of New York City Ballet (NYCB). Featuring guest performances by NYCB dancers Abi Stafford and Andrew Scordato alongside two Skidmore dance majors, the Albany Times Union wrote, “Debra Fernandez’s Swan Song… painted the most magical and mysterious images of the evening.” Her third and final collaboration with David Porter and Margo Mensing in 2012, Keeping Company with Cage, was also presented on the Zankel stage. Skidmore, however, has not been her only performance venue. In addition to her work on campus, Debra has showcased her talents in multiple artistic residencies and venues beyond Saratoga. She was a fellow in the selective and renowned Djerassi Resident Artist Program (Woodside, California) in 2001. An avid advocate for dance, she was also chosen as one of the first Artists-in-the-Schools for The Yard, a colony for choreographers in Martha’s Vineyard, where she was asked to return as the first teacher in their Junior Theater/Dance workshop program.

Debra’s contributions to the College are as rich as her scholarship. She served as department chair for eleven years, a great feat by all standards. She also served on the Committee for Appointment and Tenure (CAPT), Promotions Committee (PC), the Arts Subcommittee of CEPP, multiple search committees, and the Arts Planning Group. Debra is a longtime yoga practitioner and created the first yoga program at Skidmore College, which ran from 1997-2001. In her typical commitment to service at the College, she both implemented and taught this program on a volunteer basis. Debra has twice served on the choreography panel for The New York State Council for the Arts and also served in 1994 as a panelist for the New York State Foundation for the Arts. She has also collaborated with directors Phil Soltanoff and Carolyn Anderson as a choreographer on over seven productions in the Skidmore Theater Department.

A talented listener and masterful mentor, Debra’s contributions to the lives of her students and department faculty/staff are as significant as her work as an academic. Debra invites those around her to reflect and find meaning within themselves – this is a rare gift. Her artistic mentorship and gentle reminders to ‘cut your darlings’ has been adopted into vernacular by most of her students, colleagues, and dance alumni. When serving as chair, Debra’s typical response to requests has been, “Sounds great! What do you need?” This memory will forever remain with all who were lucky enough to be her colleagues. Debra’s unconditional support for others and her unique ability to lead by example has fostered immeasurable projects, pieces, and even careers within the discipline of dance. Her fervent invitations to find answers from within and ‘trust your gut’ has shaped the lives of all who are blessed to work with her. Jon Cooper writes:

I cannot put into words how much you have profoundly shaped me as an artist, a dancer, and a human. My time at Skidmore within your guidance, creation, and friendship means more to me than I can express. You have given me, and so many others, such incredible life lessons and memories that I still call upon today to help me navigate my path forward. Our candor, our laughter, our unapologetic editing and critiques, all lift me higher, make me smile, and have made me the artist and human I am. Thank you for always believing in me, especially when I doubt myself, and for being my mentor and friend. I could have not have been blessed with a better, kinder, more beautiful, soulful, talented teacher.

Always in perfect fashion and eager to meet the next challenge, Debra, and her beautiful dog Bodhi will be sorely missed even as the image of their whizzing through the halls of the dance theater and directing all that come into their path remains. Debra will leave a void within the department that cannot be filled: we can only attempt to continue in her legacy with the courage, intelligence, and wisdom that she astutely gifted us throughout her tenure. May we strive to work with the passion, laughter, and joy Deb has brought this department for the last 31 years. May we work to guide each other with the warmth and love that Deb has provided to us. Deb, we send you forward with gratitude. Paraphrasing the words of her student Jon Cooper: “Within our work, now and always, is an effort to make you proud.”