Skidmore business professor Minita Sanghvi has some insights into Hillary Clinton's presidential campaign. A scholar of the marketing of female politicians, Sanghvi says Clinton has a subtle Freudian advantage that could help her win the day: her candidacy is more palatable to many American voters because she’s following her husband.

Sanghvi has written that "if Sigmund Freud were here watching the campaigns, he would predict her victory . . . not because of her expertise or popularity, but because of whose wife she is." She says the United States has a strong patriarchal culture, and "Americans worry about instituting a female leader because, if only subconsciously, they worry about what that would mean for the power and authority that reside in the social concept of maleness. As Freud might explain it, in our society women are considered passive and submissive while men are considered active wielders of agency. Women are the objects, to be desired and obtained and acted on, while men are the subjects or actors, the masters of their own destinies. Thus a woman coming to power and acting as a subject in her own right creates anxiety, especially in men concerned about their own power: if male authority loses its exclusivity, does that reduce its potency?"

Many women in US politics came to power as the widows of senators, representatives, or governors; the first woman ever elected governor without a prior-office-holding husband was Connecticut’s Ella Grasso in 1975. Sanghvi has noted, "Electing a woman to follow in her man's footsteps, as Hillary may do in Bill's, is not only a tried and tested method; it also puts to rest any worries about emasculating the First Gentleman. It wouldn't take anything away from Bill Clinton, since he was already president. Or as Freud would say, if Hillary becomes a bearer of phallic power, it will derive from her husband's power." 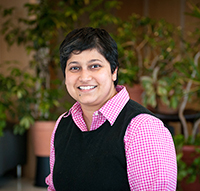 Sanghvi has argued that this is a reassuring if unspoken logic for many Americans, whose biases against women in politics are often subconscious—"which makes Freud's perspective particularly relevant," she says. "Several studies have shown that women politicians get more media coverage about their personal appearance, are addressed more informally, and are asked different questions—all of which overtly or subtly undermines their perception as serious, substantive leaders. As Freud would point out, we may think our nation is based on fairness, yet 95 years after women got the right to vote, we haven’t managed to elect one female president or vice president, have had only 36 female governors, and rank 85th in the world for women's representation in government."

Now, she concludes, "we have a female candidate who carries acceptable, husband-derived power, along with being competent and experienced in her own right."

Photo essay: Excited to be back on campus
The entire Skidmore community is enjoying the start of a new academic year filled with dynamic courses, athletics competition, beloved traditions, and — most of all — the return of all students, staff, and faculty to campus.
END_OF_DOCUMENT_TOKEN_TO_BE_REPLACED
Sep 22 2021

Thoroughbreds triumphantly return to competition
Our fall athletes have been waiting a long time to be back on the field after the 2020 season was canceled. Without missing a beat, they've returned in full force and are racking up the wins.
END_OF_DOCUMENT_TOKEN_TO_BE_REPLACED
Sep 15 2021