As Charlie Bettigole, director of Skidmore’s GIS Center for Interdisciplinary Research, and summer research assistants Avery Blake ’23 and Morgan Foster ’23 made their way through a stretch of forest adjacent to the College’s main campus, rain began to fall.

“Normally during a summer rain shower, you could take shelter under some trees. Not today,” Bettigole observed, gazing up at the bare branches that had, not long ago, provided a leafy canopy.

Through Skidmore’s Faculty-Student Summer Research Program, Bettigole, Blake, and Foster have been studying the impact of the spongy moth — formerly known as the gypsy moth — on trees in local woods and in the Lake George Watershed.

“The insect is a little bit mysterious; it booms and busts. It can appear out of nowhere and then disappear the following year,” Bettigole said. “So we're hoping to gain a little bit more of an understanding because of how intense this outbreak is in our backyard.” 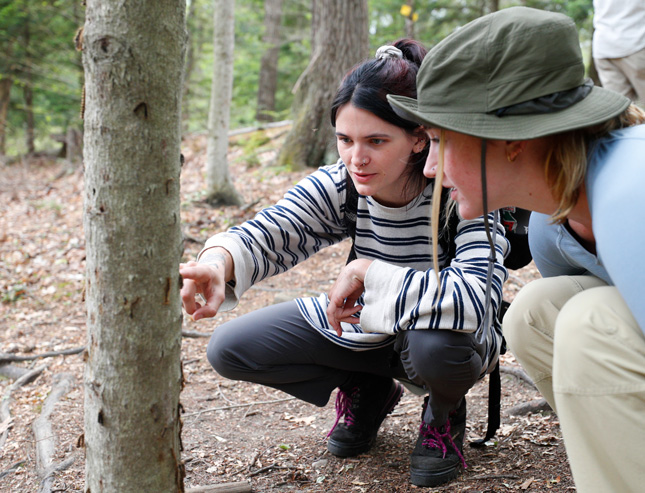 Among the questions they’re endeavoring to answer: Why do moths prefer some types of trees, forest, and landscapes over others? And in the areas hit hardest by the spongy moth year after year, what kind of tree mortality rate impacts overall landscape health?

“A big thing we have come across time and time again is that more diverse forest landscapes are a lot more resilient to defoliation,” said Foster, a political science major at Skidmore. Research has shown that multiple years of defoliation (loss of leaves), paired with other environmental stressors, can lead to widespread forest decline.

With that in mind, the summer research team has set out to use GIS (geographic information systems) and remote sensing to gain a better understanding of how outbreaks have shifted and grown over time, and to create a predictive model of what such an event could look like next year.

“Ideally, this research will give people a head start in the future when the boom does come again, because it comes every 10 to 15 years. So we're in that cycle right now,” said Blake, a geosciences major. “Usually it's mitigated after two to five years, so hopefully it's not as bad next year. But if it is, hopefully this research can be used to stop the spread.” 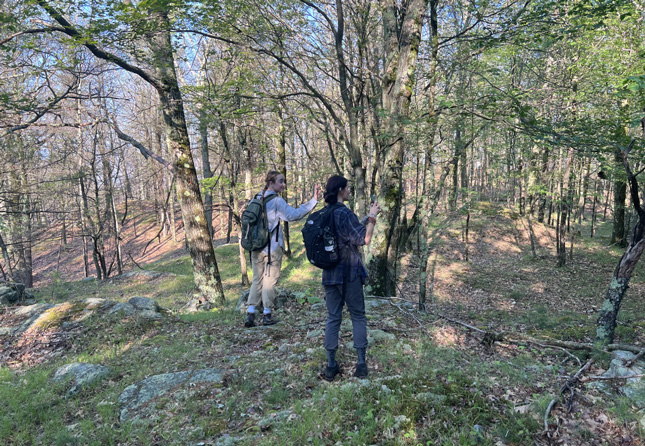 “We were out doing work on Dome Island in the middle of Lake George, inventorying forests and soils, and we looked around and noticed that instead of looking like the middle of the summer, it was looking more like late fall,” Bettigole recalled. “So we took a step back and decided to do a survey of sites that had been defoliated by these moths.”

Blake and Foster are among the students who have been out in the field, visually assessing the impact of the moths, collecting species information, counting, measuring, and surveying trees, and observing individual tree health. They have been revisiting all the sites tracked by Skidmore researchers in 2021 and adding hemispheric and satellite imagery from various sources to their data collection.

“We're able to look at, almost in real time, the patterns of this defoliation unfolding, because it's so stark from space,” Bettigole said of the utility of satellite imagery. “Some places are affected year after year, but more often patterns change.” 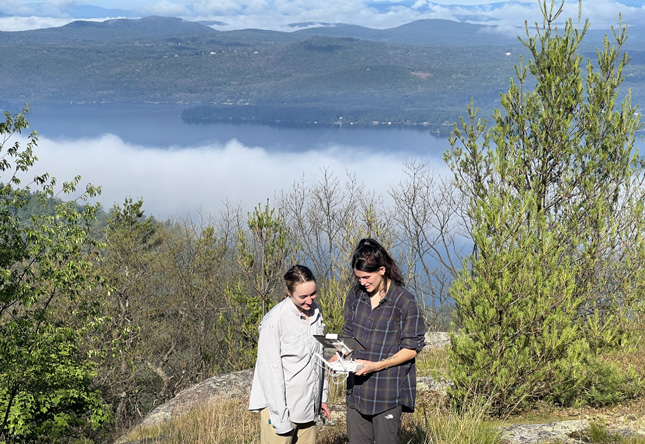 Morgan Foster '23, left, and Avery Blake '23 fly a drone in the Lake George Watershed region. They are using hemispheric and satellite photography, in addition to data collection on the ground, to analyze spongy moth patterns.

At Skidmore, the GIS Center for Interdisciplinary Research is educating students from a wide variety of majors about the many ways in which geospatial technology — and access to extensive catalogs of data and resources — can enhance their studies and research pursuits and add to their skillsets as they prepare to embark on careers.

“We are inherently an interdisciplinary center. We work with most departments on campus, either by students coming and taking courses, which they then go and apply to capstone projects or advanced project work, or by directly collaborating with other faculty,” said Bettigole. “I love being here at Skidmore because of that — because one day I'm walking around looking at caterpillars, and the next I'm looking through a rainforest canopy in Guatemala. It's why Skidmore is just a wonderful place to be, and I really wouldn't get that anywhere else.”

That excitement for what’s possible is inspiring his students as well.

“I would honestly say that taking GIS transformed my college experience, and it's funny saying that because I didn't even know what GIS was a year ago,” said Foster. “It just opened my eyes to what else is out there in terms of the field of environmental research, as well as being a political science major, because we've done a fair amount of political science work using GIS.”

For Blake, who values dynamic environmental field work and found her niche in geosciences at Skidmore, the creative potential of GIS has set her sights beyond the lab report.

“You get to both be scientific and creative because you're creating scientific analysis, and you get to create a beautiful map during the process,” said Blake. “With Skidmore GIS, everything clicked into place for me.”