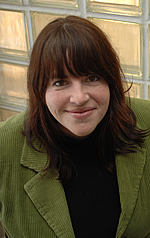 Rebecca Krefting, who goes by Beck, is Professor of American Studies—affiliate faculty to Gender Studies, Black Studies, Intergroup Relations, and Media and Film Studies—and Director of the Center for Leadership, Teaching, and Learning. She earned a BA in English and Psychology at the University of Alabama, Huntsville and an MA in Women’s Studies at Ohio State University (OSU). She completed her doctorate in American Studies at the University of Maryland, College Park (UMD). Her research specializations are feminist comedy studies; studies of visual and popular culture; histories and historiographies of stand-up comedy; preppers and post-apocalyptic cultural texts; and pedagogical studies.

Her monograph titled: All Joking Aside: American Humor and Its Discontents (Johns Hopkins UP, 2014) charts the history and economy of charged humor or humor aimed at social justice. Earlier publications include essays in the edited anthology The Laughing Stalk (Parlor Press, 2012) and a co-authored chapter on feminist architectural education published in Feminist Practices: Interdisciplinary Approaches to Women in Architecture (Ashgate Publishing Ltd., 2011). Lately she has been publishing her work in journals like Comedy Studies Journal, Studies in American Humor, Contemporary Political Theory, Journal of Cinema and Media Studies as well as contributing to edited collections such as: Hysterical!: Women in American Comedy (University of Texas Press, 2017), Transgressive Humor of American Women Writers(Palgrave Macmillan, 2018), and The Joke’s On Us: Political Comedy Encounters Neoliberalism (Lexington Books, 2018), Ethics in Comedy: Essays on Crossing the Line (McFarland and Co., 2020) and Taking a Stand: American Stand-up Comedians as Public Intellectuals (University of Mississippi Press, 2021). Other chapters can be found in the following forthcoming collections: Cambridge Companion to Stand-up Comedy (Cambridge University Press), The Oxford Handbook of Screen Comedy (Oxford University Press), and Punching Up in Stand-Up Comedy: Speaking Truth to Power (Routledge).

She has presented her research nationally and internationally and been invited to speak about her research—as a former stand-up comic, she can’t help but do so humorously—to comedy symposiums at the University of South Carolina and in Hannover and Munich, Germany as well as  many academic institutions including Aarhus University in Denmark, Dresden University of Technology, UCLA, Hampshire College, Drexel University, Concordia University, Young Harris College, Columbia College, St. Norbert’s College and ugh, you get the point. She gets her jollies talking with smart people who like to think critically about comedy.

Subscribing to the credo that teaching and research are symbiotic, Beck teaches courses fueled by her own scholarship like: Disorderly Women; A Humorous (Dis)Course; Black Feminist Thoughts, Post-Apocalyptic Film and Literature, and The Funny Thing About History. Other course topics include: American foodways, human philosophical dilemmas, contemporary American cultures, critical whiteness, and diversity in the United States. She was recognized for excellence in teaching at OSU when she was nominated for a graduate teaching award in 2004 and again at UMD when the Center for Teaching Excellence named her a Graduate Teaching Fellow (2009-10). She received the Ralph A. Ciancio Award for Excellence in Teaching in 2020. Skidmore seniors (Class of 2013) invited Beck to be their faculty commencement speaker where she went off-script and talked about Jerusalem fartichokes.

If you just cannot get enough of this lady, you can check out her website here where you will find editorials, links to her scholarship, course descriptions and information, etc.