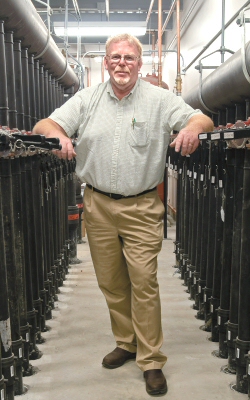 Lundberg at a campus geothermal hub

This summer Skidmore begins the installation of geothermal wells to serve the college's future Center for Integrated Sciences. The work will include blasting and removal of rock and drilling of some 240 wells nearly 500 feet deep.

Bad news: it'll be inconvenient for some building and parking access. Good news: it'll raise to more than 50% the amount of campus building space being heated and cooled geothermally-a very green and cost-effective system.

"No other college or business in the region has reached the 40% geothermal mark," according to Paul Lundberg, facilities project manager. "But what makes Skidmore truly distinct is our district approach to capturing and distributing geothermal energy. No one else in the area is doing this."

Lundberg explained that unlike a standalone geothermal system that serves a single building, a district field flexibly supports multiple buildings. By creating district systems, Skidmore has reduced the amount of wells and infrastructure required to heat and cool the campus. The college has installed two district fields and related "energy nodes"—one behind  Bernhard Theater, and the other south of the Tang Museum. This summer's CIS project will be the third.

"All in" for Skidmore
As students, staff and faculty prepare to gather together on campus for the start of the fall semester, all members of the Skidmore community must make a personal commitment to following all health and safety protocols.
END_OF_DOCUMENT_TOKEN_TO_BE_REPLACED
Aug 5 2020

Beatlemore Skidmania 2020 to be presented virtually this fall
Planning is now underway for the popular annual concert. This year, students are invited to re-imagine any song in The Beatles’ catalog.
END_OF_DOCUMENT_TOKEN_TO_BE_REPLACED
Jul 29 2020
More News