If You Build It, They Will Come:  Professional Sports Franchise Relocation in Baltimore and Cleveland

My thesis is a case study of Baltimore and Cleveland and the central question that I have set out to answer is:  If stadiums have little to no economic value for cities then why does every municipality in the country want a new stadium and multiple professional sports franchises?  By studying the Baltimore Colts moved to Indianapolis and the Cleveland Browns moved to Baltimore, I am examining the effects these moves have on the cities and the intangible positive gains that professional sports teams have had for Baltimore and Indianapolis.  My primary interest is looking at the urban renewal that has taken place in these cities and the development that has accompanied new professional sports facilities.  I argue that professional sports teams are very good for cities because of the civic pride they create and the economic development and increased tourism that follows. 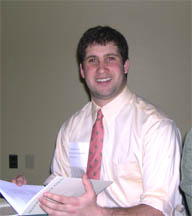 Joshua Lauren is this year's recipient of the American Studies Faculty Award.  Joshua has demonstrated both excellence and growth in the major, proving himself an extraordinarily versatile student in a wide array of American Studies courses on identity, sex and gender, autobiography and 300-level elective courses in American Studies at the University of Melbourne in Melbourne, Australia on a program through Butler University in Indianapolis..

Joshua's writing is superb, as can be witnessed by his Senior Honors Thesis, If You Build It, They Will Come:  The Effects on Professional Sports Franchise Relocation in Baltimore and Cleveland.

Joshua is also a Government minor, has spent four years on Skidmore's lacrosse team, is a peer mentor and tutor, as well as a member of the Athletic Council.  After graduation, Joshua will teach high school social studies on a Navajo Reservation in New Mexico as part of the Teach for America program.

Joshua's academic, as well as extra-curricular, life at Skidmore is a clear demonstration of growth in excellence and a wonderful example of the Skidmore credo — Creative Thought Matters.