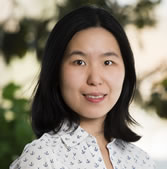 Jenny Huangfu Day 皇甫峥峥 is Associate Professor of History at Skidmore College. She obtained her PhD in History from University of California San Diego in 2012 and her BA from the University of Washington in 2007.  She grew up in Guilin, Guangxi and spends most of her time in Saratoga Springs, NY.

Professor Day has published works in intellectual, cultural, and diplomatic history of late imperial and modern China, with a special interest in breaking disciplinary boundaries and integrating literary analysis, communication studies, and legal history into her historical work.  Her monograph Qing Travelers to the Far West is an example of this type of work.  The book is named one of the Outstanding Academic Title of 2019 by ACRL Choice.

She is currently working on a new book project on international law and transnational fugitives in modern China, with a focus on the mobility of transnational revolutionary networks and the evolving legal and judicial institutions which shaped their interactions with nation-states.  It reconsiders the Chinese revolution from the perspective of interstates justice and international law as an evolving and contested space.