Streb Extreme Action knows how to make an impact

If you’re going to learn to fly, it’s best to learn from an extreme action hero.

It’s not easy. And let me just say from experience, it might test muscles you didn’t know you had. You’ll definitely need a good, thick mat, because you’ll have to fall — like you mean it — over and over and over again.

The members — aka “extreme action heroes” — of Streb Extreme Action make it look easy, and they’re willing to let us in on the secrets to their superpowers. The company, which fuses modern dance, sports, gymnastics and elements of the circus, is in residency at Skidmore through June 22.

A corresponding “Streb Action” exhibition is on display through July 21 in the Tang Teaching Museum’s Wachenheim Gallery, where the company is also holding open rehearsals, a handful of interactive workshops and related events throughout June.

The premier public event was a full performance of new and recent gravity-defying works June 14 at the Tang.

Elizabeth Streb, the choreographer and “action architect” who founded Streb Extreme Action in 1985, says the Skidmore residency has provided a welcome opportunity to reflect on the company’s repertoire.

“I think it's just been great for us,” she said. “It’s been a plethora of riches. It’s a perfect setting at a university to do research and development.”

The MacArthur “Genius” Award winner started on her path as a dancer, but her reverence for gravity and her obsession with machinery, velocity and impact inspired her to blaze her own trail.

“I believed humans could fly,” Streb said. “But you have to land — you can't not land. So I started figuring out how a body could take impact, how there are different bases of support you could land on, like the shins, back, stomach. And how that connected to the proper examination of space.”

During a recent open rehearsal at the Tang, Streb observed as her team of action heroes moved through a giant spinning wheel, walking the spokes with rhythm and intention or going for a spin around the outside before falling gracefully and purposefully to the mat below. 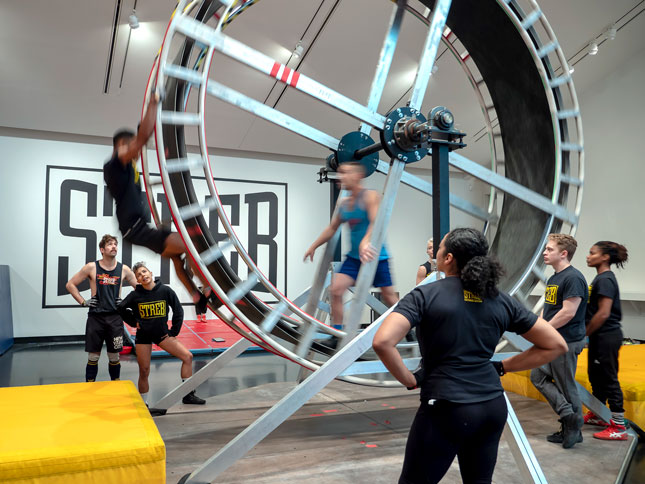 Members of Streb Extreme Action practice wheel work during an open rehearsal at the Tang. (Photo by Novilhelha Moleni)

“OK, yeah, very nice! That's beautiful,” she shouted as she sat behind a table scattered with her drawings and notes. Dozens of her sketches, which are blueprints for each move or routine she dreams up, are displayed in the cases that line the walls of the Wachenheim Gallery.

One might think that Streb, who holds a master’s degree in humanities and social thought and a bachelor’s degree in modern dance, was also proficient in physics. But she humbly denies having any expertise in the subject.

“I’m just experimenting,” she said. “I'm not a scientist, I'm just interested in physics and philosophy.”

Streb says she poses a question, and her performers are the engineers who work it out. Hudson Scenic, which is also known for building Broadway theater sets, creates the apparatuses and figures out a lot of the mechanics.

Since 2003, the company’s home base has been a former loading facility in Brooklyn, a space called the Streb Lab for Action Mechanics, or SLAM. It serves as a performance and presenting venue and as an open-access education and rehearsal space, home of the Streb PopAction School and the España/Streb Trapeze Academy. Elizabeth Streb encourages visitors.

The company travels around the world, performing in theaters, museums, in the streets, in sports stadiums and at other unique venues.

Other highlights of the Skidmore residency, which is sponsored in part by the New York State Council on the Arts Dance Program, include:

The Streb residency is one of many summer programs organized by Skidmore’s Office of Special Programs.

Skidmore honors graduates during live Commencement
Skidmore conferred 647 degrees in a live, virtual Commencement ceremony on Saturday, May 30.
END_OF_DOCUMENT_TOKEN_TO_BE_REPLACED
May 30 2020

Congratulations to the Class of 2020
Economics, history and psychology professors, deans, advisers, administrative assistants and even Doodles the dog send their best wishes to graduates.
END_OF_DOCUMENT_TOKEN_TO_BE_REPLACED
May 30 2020
More News