History of The Surrey-Williamson Inn

The Surrey-Williamson Inn is a boutique inn on Skidmore College’s campus in the heart of Saratoga Springs, New York.

The English Tudor-style house was first named Broadview Lodge when it was built in 1918 for E. Clarence Jones, a New York City stockbroker, and his wife, the English actress Marjorie Blossom. Back then, the property looked across North Broadway to Henry Hilton’s former Woodlawn Park (the current Skidmore College campus), an abandoned estate that once featured handsome Queen Anne-style houses, greenhouses, stables, 30 miles of carriage roads, and sheep to keep the vast lawns under control.

When he commissioned the building, Jones had reportedly shown the builders — the firm of William J. Case and Son — a photograph of an old manor house in England’s Cotswolds district and instructed them to replicate it. No expense was spared.

The main building was designed as a private home featuring more than a dozen rooms, a glassed-in breakfast porch and a wide double staircase off the entranceway. The service section on the ground level contained a kitchen, butler’s pantry, refrigerator room, servants’ dining room, flower room, and the butler’s bedroom and bath. The grounds were beautiful, half in woodland and half lavishly landscaped with stone walls, statuary, flower beds, a sunken formal garden, a goldfish pool, and a vine-covered pergola leading to a tennis court. 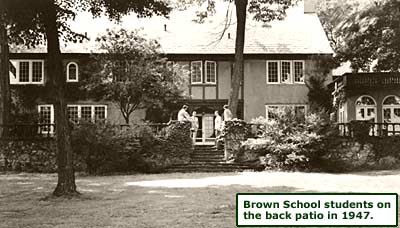 After Jones died in 1926, his widow continued to enjoy the whirl of horse racing and social events each summer. Mrs. Amscott Wilson used the estate as a summer home until it was bought in 1945 by former state Sen. Thomas Brown of Schenectady for his daughter, Elinor, and her husband, Roy Wright.

The next year, Wright opened the Brown School for Boys on the estate’s grounds. Although the school was meant to prepare high school students for college, many were World War II veterans in their early twenties who needed a year of college prep before entering colleges on the GI Bill. The school graduated two classes before closing in September 1948. In 1949, the Wrights reopened the estate as a bed and breakfast called the Surrey Inn.

Robert Ducas bought the property in 1964 and established the Surrey Inn Corporation. In January 1967, Skidmore College acquired the main house and the former garage. The College was then in the early stages of moving from its early downtown Saratoga Springs campus. As the inn offered ready-made quarters, the College’s plans were "to continue the Surrey Inn as a commercial hostelry for the present time." 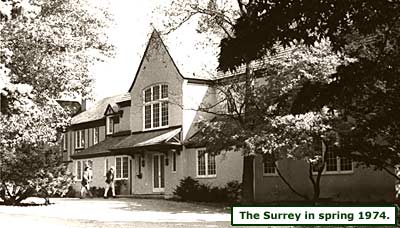 Meanwhile, Anne Palamountain, the wife of former Skidmore president Joseph C. Palamountain Jr. (1965-87) and long-time Skidmore supporter and benefactor, obtained donations of furniture, carpeting and draperies for the main building; other antiques and furnishings came from the houses of former presidents and of Skidmore’s founder Lucy Skidmore Scribner.

Once refurbished for Skidmore’s use, the Surrey became a popular venue for ceremonies, receptions, meetings and academic symposia. In 1999, Skidmore renamed the manor the Surrey-Williamson Inn to honor longtime trustee and benefactor Susan Kettering Williamson ’59.

Today, the Surrey-Williamson Inn continues to operate as a boutique inn and event space for College visitors, Saratoga Springs travelers, local community members, alumni and more. From weddings and corporate events to academic receptions and prospective family visits, it remains a treasure for all who experience its charming history and creative hospitality.