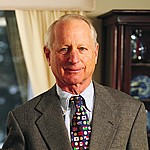 Shelby M.C. Davis was the founder of Davis Advisors, a mutual fund management company with more than $60 billion under management now being run by his son Christopher.

Mr. Davis received his Bachelor of Arts degree from Princeton University in 1958. He majored in American History, was a member of Tiger Inn, and was a reporter for the college newspaper, The Daily Princetonian.

Mr. Davis began his career with the Bank of New York, where he worked for eight years. He entered the Bank as a Security Analyst and after five years was put in charge of Equity Research and named its youngest Vice President since Alexander Hamilton.

Since retiring from running Davis Advisors, Mr. Davis has become a major philanthropist. With veteran international educator Phil Geier, Mr. Davis founded the Davis United World College Scholars Program in the year 2000. The program has since grown to become the world's largest international scholarship program in the world. Mr. Davis is currently contributing over $40 million annually to this cause, which to date has supported over 5,500 scholars on over 91 American college and university campuses.

Mr. Davis is an honorary trustee of the U.S. Ski & Snowboard Association and International Patron of the United World College movement. He has served on the boards of Princeton University, United World College-USA, the Hoover Institution and the Teton Science School. He has been widely recognized for his philanthropy and awarded numerous honorary degrees.

Mr. Davis is married to Gale Lansing Davis and has six children, three with Gale and three from a previous marriage. Mr. and Mrs. Davis reside in Jackson Hole, Wyoming. He has a total of eight grandchildren.