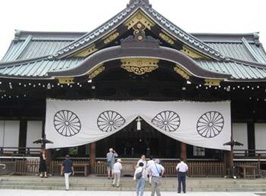 The Yasukuni Shrine in Toyko, which is dedicated to the memory and worship of Japanese citizens who died in post-1868 wars, especially WW II.  The shrine is currently involved in controversy because of yearly visits from the Japanese Prime Minister, Junichiro Koizumi.  The neighboring museum is notorious for its exhibits that claim that the United States forced Japan into WWII and that therefore Japan is not guilty of causing the Pacific part of the war. 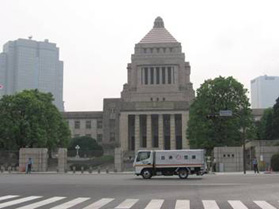 The Japanese Parliament building in downtown Tokyo.  While near the building, Prof. Hoffmann was worried that he would be mistaken for a terrorist as he took pictures, but the guards did not bother him.  Perhaps they did not do so, he thought, so because of his grey hair! 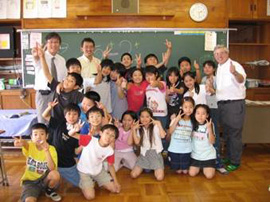 Prof. Hoffmann and the fifth-grade class at the elementary school he visited   , his "honorary homeroom" for  that  day.  He ate lunch with the group of approximately 20 students and its teacher   while spending  much of the day observing that class and others in the school.  The building itself  , in Yokohama ,  is kept very clean, in part by asking everyone to remove their shoes when they enter the building.  Prof. Hoffmann was given a pair of slippers to wear and a locker in which to keep his shoes. 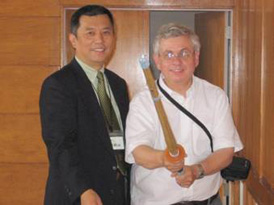 Prof. Hoffmann with a volunteer from the neighborhood  who helps teach Kendo to the students at the elementary school.  Kendo is a training version of the ancient sword fighting used by Japanese warriors, and is now part of the school's curriculum.  Kendo is practiced with four foot wooden sticks, one of  which Prof. Hoffmann is holding in this picture.