The Fiscus Lecture was inaugurated in 1991 by Skidmore's Department of Government (Political Science Department, as of June 2016) to honor the late Ronald J. Fiscus, a Skidmore faculty member from 1980 to his death in 1990. Professor Fiscus was a constitutional law specialist and a key contributor to the development of a minor in law and society at Skidmore.

RONALD J. FISCUS, a teacher and scholar of constitutional law, was a member of the Skidmore Government Department from 1980 until his untimely death at age 42 in 1990. After graduating from Carleton College, Ron served in the Peace Corps in Chad before completing a Ph.D. in political science at the University of Wisconsin. At Skidmore, Professor Fiscus was well known for the excellence of his teaching. He was one of the original faculty members involved in creating Liberal Studies I, served as its coordinator the first year it was taught, and was selected by his colleagues to give the very first lecture in the course. Ron was also instrumental in developing and establishing Skidmore's law and society minor, which involves students in a multidisciplinary study of the relationship between law and other social institutions and processes. After Ron's death, his colleagues and friends endowed an annual lecture in his honor, the Ronald J. Fiscus Memorial Lecture, to bring to campus distinguished individuals who would speak on issues related to law and society. 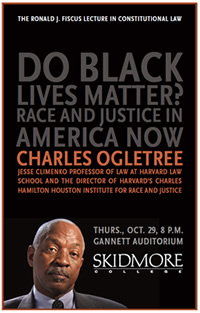 "Do Black Lives Matter? Race and Justice in America Now."