Skip to Main Content
Scroll to Top
The Chinese Program 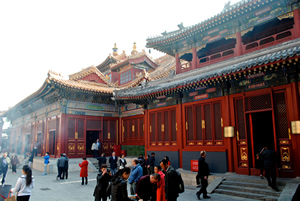 Mandarin Chinese is the most widely spoken language in the world today. The Chinese program at Skidmore offers language classes from beginning to advanced levels, as well as courses in Chinese literature and culture. Some other departments and programs also offer courses about China. Our curriculum can lead to a minor in Chinese or provide the basis for a major in Asian Studies, International Affairs, or Management and Business.

How difficult is it to learn Chinese?

Chinese grammar is remarkably simple. There are no inflections, cases, genders, declensions, numbers, or tenses. Many people who begin to study Chinese quickly become fascinated with the unique system of the language and are able to communicate in Chinese after two semesters. According to the U.S. State Department language training experts, Chinese ranks with Japanese on the level of difficulty. Three major things distinguish Chinese from European languages. First, the writing system is very complex; consequently, about half of the time spent in beginning Chinese concerns learning the writing system. Second, unlike European languages, Chinese shares no cognates with English. Third, Chinese is a tonal language, and, for this reason, a major task in learning Chinese is developing the habit of listening for tonal distinctions and producing them in speech.

What kind of Chinese will I learn?

We teach Modern Standard Chinese, the official language of the People's Republic of China. This is the native dialect of the people of the northern part of China. The Chinese government is making an effort to teach it to all school children and public employees all over China. This dialect is also known as putonghua (in the PRC) or guoyu (in Taiwan); it is the Beijing dialect or Mandarin. It is different from Cantonese, the Shanghai dialect, and many other regional dialects, which are mutually unintelligible, although the written language is virtually the same for all.

What are the objectives of Chinese courses?

The Chinese courses offered in the Department of World Languages and Literatures at Skidmore are designed to provide students with the basic language skills needed to function verbally and to read contemporary Chinese publications in China, Taiwan, Hong Kong, Singapore, and other parts of East Asia. In the first-year classes, we put equal emphasis on speaking, listening, writing, and reading. Students are able to use approximately 350 characters by the end of the first year. In the second year, the emphasis shifts slightly toward reading and speaking, and by the third year we offer advanced courses in reading, speaking, and composition. We see language as a part of a culture and try to integrate both from the very beginning.

Is there any way I can study Chinese in China?

Yes! Skidmore is affiliated with the Associated Colleges in China Program (ACC), the CET Shanghai Program, and the IES Beijing Program. Through these programs, students can obtain internships in such fields as business, economics, education, environmental studies, and journalism with many American and international organizations inside China. In addition, there are several other programs available in the PRC, Taiwan, and Hong Kong for students who have had one year of Chinese.

Besides courses in the Chinese language, what else can I learn about China at Skidmore?

Courses on Chinese literature, film, and culture are offered through Skidmore's Department of World Languages and Literatures. These courses fulfill the non-western requirement and also count towards fulfilling Asian Studies, Gender Studies, International Affairs, or Management and Business requirements. In addition, other departments on campus offer courses about China.