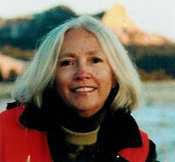 My primary field of preparation is the history of Christianity, particularly post-Enlightenment. My teaching interests are intrinsically cross-disciplinary. In religion they include religion and culture studies, contemporary American religion, theology, religion and ecology, and feminist studies in religion. In addition to teaching in the religion curriculum, I also teach courses on feminist theories and methodologies, ecofeminism, and global and transnational feminism. In my pedagogy, as in my research and writing, I therefore move freely among women’s and gender studies, environmental studies and international affairs.

“Your Wicked Good Militia,” review essay on Carolyn Chute’s The School on Heart’s Content Road, The Women’s Review of Books(May/June, 2009), 15-17.

“The Truths of Dirty Fingernails,” review essay on Jennifer Bové’s A Mile in Her Boots and Laura Browder’s Her Best Shot: Women and Guns in America, The Women’s Review of Books (March/April, 2007).

“From Domestic Terrorism to Armed Revolution: Women’s Right to Self-defense as an Essential Human Right,” The Journal of Law, Economics and Policy II.2, Fall 2006.

“The Political Intolerance of Academic Feminism,” The Chronicle of Higher Education (June 21, 2002), B16.

Little Joy on the Prairie,” review article on Judy Blunt’s Breaking Clean and Margaret Bell’s When Montana and I Were Young, The Women’s Review of Books (April 2002), 12-13.

“Mothers of Invention,” a review of The Myth of Matriarchal Prehistory by Cynthia Eller, The Women’s Review of Books(November 2000) 6-7.