Skidmore College has received a grant of $994,342 from the federal Department of Homeland Security to conduct research into cardiac fatalities among first responders. Patricia Fehling and Denise Smith, professors of exercise science at the College, are in charge of the project, titled “Effect of Physical Fitness on Physiological Recovery from Firefighting Activity.”

Rep. Kirsten Gillibrand, congresswoman for the 20th District, which includes Skidmore, announced the grant June 26. “I am pleased to announce this grant for such important research for our first responders,” said Gillibrand, a member of the Armed Services Committee. “I am supportive of anything that helps protect the health and well-being of our local heroes.” 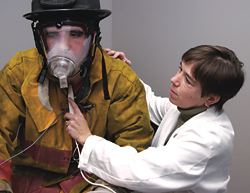 Firefighting is dangerous for myriad reasons, but neither smoke nor burn injuries account for most of the fatalities on the fire ground. Cardiac-related events are responsible for 40–50 percent of line-of-duty deaths among firefighters, according to the United States Fire Administration. The largest percentage of cardiac fatalities occurs on the fire ground after firefighting activity, even though that activity accounts for a small percentage of a firefighter’s time on the job.

This high cardiac fatality rate is considered to be a crisis in the firefighting community, and has prompted considerable attention from major organizations such as the Inter-national Association of Firefighters, the International Association of Fire Chiefs, the National Volunteer Fire Council, the National Fallen Firefighters Foundation, and the Congressional Fire Service Caucus. The U.S. Department of Homeland Security, through its Fire Act Grant, provides research funding to address critical issues in the fire service, including the life safety of firefighters.

Said Smith, “The overall goal of our research is to learn more about the factors that increase a firefighter’s vulnerability to heart attacks in an attempt to decrease line-of-duty deaths among firefighters. Specifically, we will focus on the role of physical fitness in determining the cardiovascular response to fighting fires, and how quickly the body recovers from the stress of that work.”

While it is known that physical fitness is a factor in any person’s response to physical activity in general, little is known about the relationship between firefighter fitness profiles and the physiological processes – adrenaline surge, extreme exertion, and elevated body temperature – that are specifically triggered by fighting fires, according to Fehling.

They will conduct closely linked field-based and laboratory-based studies. The field study will be conducted in collaboration with the Oxnard (Calif.) Fire Department and Foster-Miller, Inc., a research partner that makes medical monitoring devices. The Oxnard firefighters will wear wireless Foster-Miller physiologic status monitors (PSMs) during all types of duties, including response to alarms; fire suppression, rehab, and recovery following an incident; returning from an incident; physical training; non-fire emergencies; and fire station duties. Data from the monitors will be used in conjunction with several years’ worth of fitness data previously collected by the Performance Therapy Center (another research partner, located in California) to categorize firefighters into three fitness groups: aerobically trained, strength-trained, and untrained.

In a parallel, controlled laboratory study at Skidmore’s Human Performance Laboratory, the researchers will focus on cardiovascular recovery from the combination of physical work and high body temperature. Aerobically trained and strength-trained subjects will undergo cardiovascular and metabolic monitoring while engaging in two exercise trials that mimic firefighting work: one trial while wearing shorts and a t-shirt, and one while wearing firefighters’ clothing and gear (supplied by Globe Inc., an innovator in personal firefighting gear). Also for a two-hour period after the exercise—a time of particular vulnerability to cardiac-related events—Fehling and Smith will take sophisticated measurements of cardiovascular health, including core temperature, autonomic nervous system function, hormonal variables, vascular function, and a series of blood-clotting factors.

Skidmore students will work under the direction of Fehling and Smith on the research. The professors explained, “The students will have the opportunity to be engaged with real science and learn more about how science informs public policy.”

The study represents the most comprehensive work to date to characterize the effects of firefighting on physiological functioning of firefighters and also the most extensive investigation of the critical period following firefighting activity.