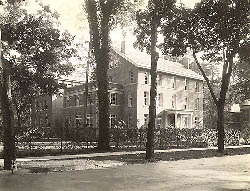 Although its charter only permitted the Skidmore School of Arts to offer secondary-level courses, the ambitious President Keyes began to introduce collegiate-level instruction into the curriculum. The school slowly began phasing out its secondary-level courses throughout decade, and by the early 1920s was poised to offer its students baccalaureate degrees. In 1922, President Keyes won over the Board of Regents, and the Skidmore School of Arts became Skidmore College, a four-year degree-granting institution. 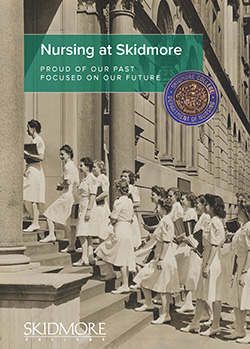 In 1922 Skidmore President Charles Henry Keyes announced a new nursing program, one of the first of its kind to combine liberal arts and nursing science. Over six decades, this marquee program was a cornerstone helping to build the Skidmore College we know today.

President Keyes died in office only two and a half years after he victoriously brought collegiate status to Skidmore. Succeeding him was Harvard-educated Henry T. Moore, who was inaugurated in 1925 and remained Skidmore's President for 32 years.

In the early 1930s, Skidmore College was spread among approximately 20 buildings in downtown Saratoga Springs. One was Griffith Hall, pictured above. Griffith housed the science department's offices, classrooms and labratories. The building, located on Union Avenue, is now a part of the Empire State College campus.

Skidmore's incoming freshmen underwent several initiation rituals. One was the wearing of the freshman bib. As described in the "College Traditions" section of the 1942–43 Student Handbook, "each entering student is given an oil cloth bib bearing her name and address, which she is required to wear the first few weeks of college. This amusing custom has a real purpose in enabling freshmen to identify each other and in accelerating acquaintance, and in enabling upperclassmen to identify them."

By the time President Moore retired in 1957, Skidmore's student body stood at 1,100 strong and the campus was spread throughout approximately 80 buildings in downtown Saratoga Springs. President Moore had succeeded in enriching Skidmore's liberal arts focus by adding such programs as biology, drama and speech, history, philosophy, psychology and Romance languages.