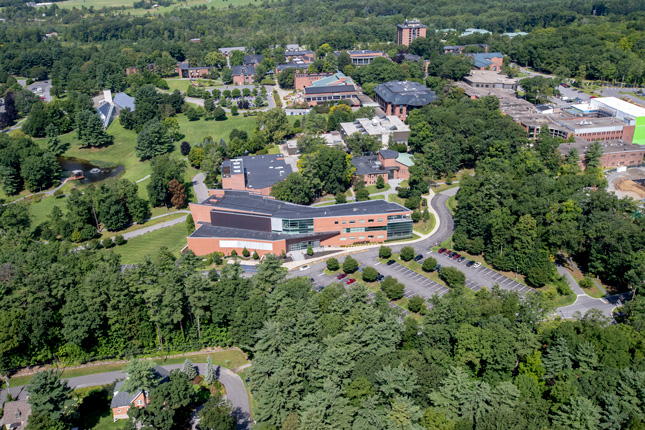 David Porter, formerly a professor and president of Carleton College, became Skidmore's fifth president in 1987. President Porter led the College in the overwhelmingly successful Journey Campaign, which allowed Skidmore to increase endowment for student scholarships, fund special initiatives in library services, the sciences and athletics, and construct the new Tang Teaching Museum and Art Gallery. President Porter's other initiatives, such as increasing diversity on campus, strengthening academic life and expanding and improving campus buildings, prepared the College for a new century of growth and achievement.

Jamienne Shayne Studley became the sixth president of Skidmore on June 1, 1999. In her words, "Skidmore's project, indeed life's project, is to achieve balance." Studley brought to Skidmore a rich and diverse background to help with this challenging task. In 1997-98, she served as general counsel at the U.S. Department of Education, acting as a key advisor to Secretary Richard W. Riley. This followed a service of four years in the department as deputy counsel. She was associate dean and lecturer of law at Yale Law School from 1983 to 1987, and in the early 1990s was an adjunct faculty and visiting scholar at the University of California at Berkeley School of Law. She is a graduate of Barnard College and Harvard Law School. Jamienne Studley left Skidmore in 2003.

Philip A. Glotzbach, a philosopher, professor, academic administrator and spokesperson on issues of higher education, became the seventh president of Skidmore College on July 1, 2003. He came to Skidmore following 11 years at the University of Redlands in Redlands, California, where he served as vice president for academic affairs and earlier was dean of the College of Arts and Sciences. Major initiatives during Glotzbach's 17-year tenure included the transformation of Skidmore’s First-Year Experience program in 2005, the opening of Northwoods Village in 2006, construction of the acclaimed 54,000-square-foot Arthur Zankel Music Center in 2010, the building of Sussman Village in 2013 and the ongoing construction of the Center for Integrated Sciences, the largest single academic project in College's history. Under Glotzbach's leadership, Skidmore also achieved record applications for admission, quadrupled its financial aid budget and increased diversity, admitting more domestic students of color, first-generation college students and international students. He retired from Skidmore on June 30, 2020.

Marc C. Conner, an innovative leader of interdisciplinary academic programs, a longtime advocate of diversity and inclusion initiatives and a widely published professor of English, became the eighth president of Skidmore College on July 1, 2020. Conner joined the College following over 24 years at Washington and Lee University, a private liberal arts university in Lexington, Virginia. From 2016 to 2020, Conner was the longest-serving provost and chief academic officer in Washington and Lee’s history. He has published extensively on modern American, African American and Irish literature.