The Skidmore family and college seals

The family that would eventually be called Skidmore came to England from Normandy sometime before 1071. The surname is first recorded as "de Scudemer." Scudemer/Scudamore gave way to Skydmore/Skidmore by the mid-14th century, though the Norman spelling enjoyed a renaissance during the reign of the Tudors, and still survives.

The part of the college seal considered correct from a heraldic standpoint is the stirrup, which has been traced to the 1323 seal of Peter Scudamor. A Welsh pedigree, ca. 1600, cites a John Skydmore as using a seal with three stirrups; a shield bearing such an emblem appears in a stained glass window at the church in Upton Scudamore, near Bath, England.

Later additions—helm, vegetation, unicorn, motto, and vertical lines on the escutcheon—were invented or appropriated from heraldry unrelated to the lineage of Lucy Skidmore Scribner. The motto scuto amoris divini ("by the shield of God's love") is presumed to be a play on the family name: scut- + amor- = Scudamor.

Sources: "An Overview of the History of the Skidmore Family" (www.skidmoregenealogy.com) and Mary C. Lynn.

A wax seal attached to an original parchment deed dated August 24, 1323, at the Huntington Library in San Marino, California (from a drawing by Warren Skidmore) 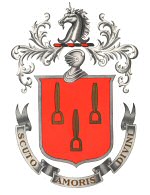 Skydmore arms as depicted in a church window in Upton Scudamore, England 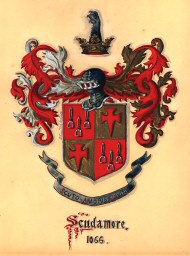 A later version, with helm, vegetation, and a unicorn