With the Saratoga Performing Arts Center and Saratoga Race Course, as well as the region's historic and recreational sites, Saratoga Springs is rich with possibility in the summer. So is Skidmore, which features a variety of programs and residencies, including a competitive, paid program that offers undergrads an opportunity to conduct original academic research directly with faculty members. This summer there are approximately 80 students working with 40 faculty members on 44 summer research projects. A sampling includes the following: 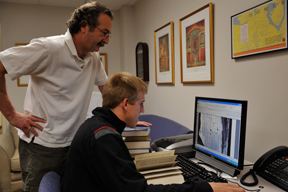 Arnush, Jaffe study Athenian inscriptions
on the web (Elissa Nadworny '10 photo)
An odd coupling: 21st-century technology and ancient Greek texts.Classics professor Michael Arnush and Ross Jaffe '11 are creating an open-source textbook of Greek manuscripts that will be available online. They chose a small number of Athenian inscriptions that highlight the development of the world's first representative democracy and are currently working on fleshing out the texts (which are missing words and paragraphs in some cases, since they were originally published on stone), translating, and providing commentary.

Using XML, Jaffe is coding and storing the data in order to make a template that will enable him to fill in the translation and commentary, and eventually provide an online version of the pair's work. The final result will be a first of its kind to combine Greek texts, English translations, and linguistic and historical commentary in one medium accessible to all audiences. For Jaffe, the project involves figuring out how to incorporate Greek into XML—essentially working in two very different languages. He says it's challenging, but when finished it will allow anyone, from the general public to scholars, to access the online research.

The short-term goal is to complete a small selection of inscriptions as a technologically and intellectually compelling sample in order to leverage financial backing for a project that could ultimately include 50 key texts that demonstrate how Athens worked as a Democracy.

Jaffe, who has studied Greek for three years, is a classics-economics double major who has been Arnush's student assistant since 2008. Summer scholarship is great, he says. "I am learning and working on things that I like, but it still feels like summer. It's surprising to see other researchers—other students—and to learn about their work." Says Arnush, "Summer research brings together faculty whose lifeblood is teaching and scholarship with students who demonstrate engagement early in their careers." 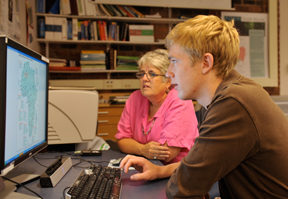 Aronson, Noone review a map of
Africa (Elissa Nadworny '10 photo)

In addition to having the celebrated Tang teaching museum and art gallery, Skidmore is one of a few liberal arts colleges to house a GIS center, and Noone, an environmental studies major, has spent a significant amount of time there researching and generating data and related visuals about the African environment. The goal is to provide vivid and informed visualizations, including maps, of the African landscape and to highlight some of the pressing environmental issues that inspire the contemporary African artists featured in the exhibition.

Co-curated by Aronson and John Weber, Dayton Director of the Tang, the exhibition, Environment and Object in Recent African Art, will open in February 2011. Art by contemporary African artists living in Africa and abroad will demonstrate the wide-ranging effects of the environment on African art and the use of found objects and materials as a historical constant that connects many contemporary artists with traditions in Africa and beyond.

Noone has discovered the challenges of determining what needs to be included for the exhibition and acquiring the data necessary to portray key messages. He is analyzing environmental data on such subjects as water, oil, and mineral extraction, as well as the effects of urban sprawl. A computer monitor displaying the maps and data collected will connect Noone's work to the objects in the exhibition.

Although he has had experience in GIS, Noone is teaching himself remote sensing (which incorporates GPS) in order to create maps that show environmental change over time. The hope is to generate data on a range of environmental concerns and also to design and implement a way to display that data at the Tang.

Unlike the majority of summer research teams, Aronson and Noone did not know each other before their collaboration started. They met when Aronson and some colleagues were in the GIS center one day brainstorming about how the center's resources might enhance the exhibition. Says Aronson, "I had always wanted to present a sense of Africa as a space and an experience with this exhibition. The result brings together art, GIS/the environment, and science together in a compelling way." 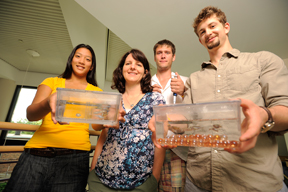 In the laboratory: secrets of the zebrafish. Biology professor Jennifer Bonner and three students (Andrew Ross '12, and Cecilia Culp andAleksander Krazinski, both rising seniors) are learning about spinal-cord development and fetal alcohol syndrome with the help of approximately 500 zebrafish (Danio rerio).

The quartet is studying fundamental mechanisms that underlie nerve growth in the spinal cord during development. In addition, they are developing a model for fetal alcohol syndrome (FAS) in zebrafish. Specifically, the scholars are examining the effect of the gene dcc on CoPA neurons in the spinal cord and analyzing the effect of ethanol on CoPA growth in zebrafish embryos. The CoPA neuron is a key decision-maker in spinal cord development; the researchers hope to learn whether dcc helps determine where CoPA grows. The FAS research hypothesis is that ethanol will disrupt CoPA growth. Both studies require the use of zebrafish embryos

The student researchers learned early that zebrafish are in charge of the clock—no research takes place until the embryos reach critical points of development. This means that the researchers are as likely to work in the middle of the afternoon as in the middle of the night, which has happened about once a week. "The animals rule your life," says Bonner.

And they provide a rich opportunity for research. The students (Ross is majoring in biology with a concentration in cell biology, Culp is a neuroscience major, and Krazinski is a biology major concentrating in molecular biology) are "doing everything," from the fish tank to the petri dish to the microscope. Culp said that a friend attending a large Midwest university was envious when comparing their summer experiences. The friend is cleaning animal cages and washing lab equipment, while Culp and colleagues are collecting and analyzing data that could form the foundation of a paper for a scholarly journal or academic presentation.

The students have learned firsthand that scientific research requires solid organization and a lot of time. The process does not allow for much instant gratification, notes Bonner. "Balance is important in science," she said.

Computer-dobby textiles. What happens when you take the cover off an old, unused dobby loom, clean it, replace its worn parts, then purchase and install new software? That 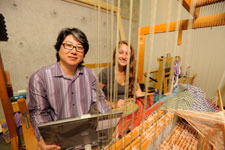 Lee and Manganiello at the
Compu-Dobby loom
(Gary Gold photo)

was the first step in the summer research project on computer-dobby textiles involving professor Sang Wook Lee and Victoria Manganiello '12.

The 30-year-old loom needed refurbishment, which the two undertook in tandem. Dobby looms use a flat plate that the weaver has perforated, like an old computer punch card, to guide the various threads in patterns too complex to follow from memory. The Compu-Dobby replaces the hole-punched templates with software controls. Either way, the artist conceives the pattern and creates the template.

Now that the loom has been repaired, Manganiello is creating original designs influenced by her visit in early June to the Otavalo region in Ecuador, where she experienced the country's rich textile culture and learned more about the juxtaposition of art and function. Her Ecuadoran experience is inspiring the weavings she is creating on the Compu-Dobby since she returned. The digital technology allows her to create original interpretations that incorporate intricate designs and the vibrant, bold colors reminiscent of the Otavalo region.

Lee, too, is grateful to have a new tool available for students to use for digital fiber design in the year ahead. 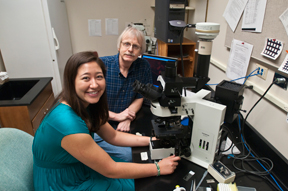 Domozych and Burgio in the lab
(Eric Jenks '09 photo)

Domozych is excited about both the pure and applied potential applications of the research. He explained, "Penium is on its way to being considered a 'model' organism, and provides a great tool for elucidating the basic cell biology, evolution and molecular biology of green plants." He isolated the organism from a wetland in Greenfield, N.Y., and in several labs around the world, the genome of the organism is currently being sequenced. He anticipates that the information gained from this research will lead to greater clarity about the ways pectins are synthesized and secreted by plants.

Additionally, Penium may provide a valuable unicellular system for genetic transformation that will lead to its use in the secretion of important products used in the food and pharmaceutical industries. In this, the first summer of the two-year study, Burgio, an environmental studies major, is assisting Domozych. She was one of four students to accompany Domozych to Denmark in July, where they presented related research on Penium at an international workshop at the University of Copenhagen.

Speed dating: What makes for success? Can a five-minute speed date lead to greater intimacy? That's one question that psychology professor Mary Campa and Samantha Savoy '12 are hoping to discover in their summer research, an analysis of communication patterns in initial dating conversations. They are reviewing the taped transcripts of three separate speed-dating events to see what people choose to disclose—or not—and to pinpoint those attributes that may foster greater self-disclosure and intimacy.

Campa's abstract explains, "We are interested in how non-verbal aspects of mating, such as physical attraction, influence the type, amount, and level of self-disclosure in initial dating conversations and how this behavior relates to choosing a partner for future interactions." Prior research has shown that self-disclosure is a reliable method of developing intimacy.

So what do people tend to reveal? Among the college students in the study, conversational topics included course preferences, musical tastes, and relationships with parents; one adult conversation zeroed in on relationships with the participant's children. Savoy, who is currently coding and rating the transcripts, described one that contained a number of pauses and simple answers containing few details. "I thought, hmmm. This is not going well," she said. On the other hand, she noted one transcript indicated that both partners couldn't believe how quickly the time had passed—a remark that indicated a successful interaction. And more than one "date" ended with a promise of future meeting between the participants.

The research is likely to extend beyond the summer and become the basis for an article submitted to a peer-reviewed journal.