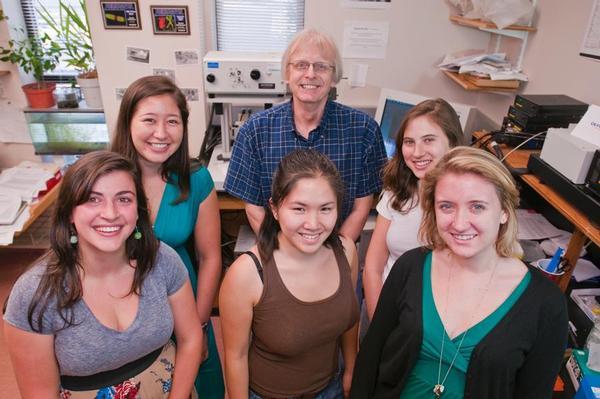 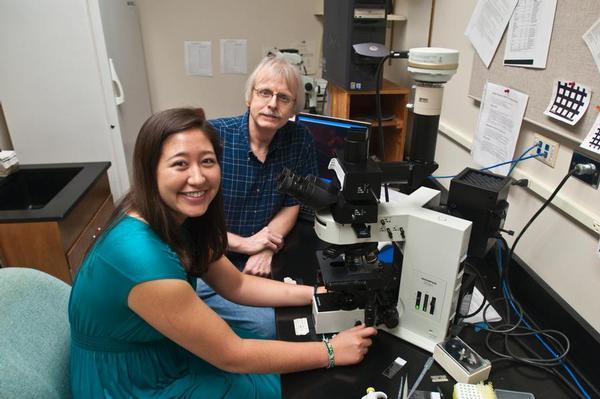 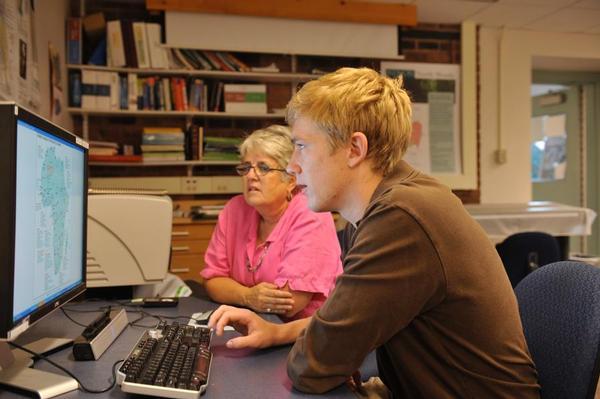 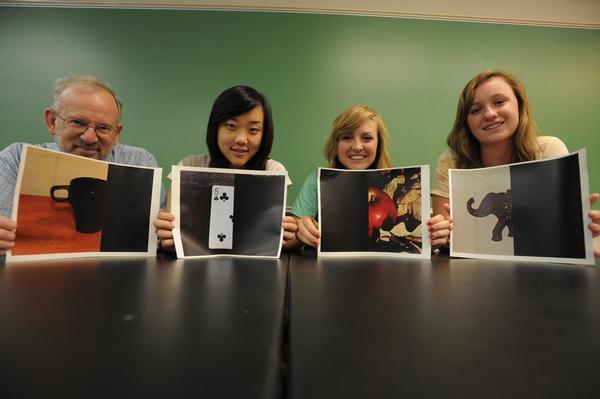 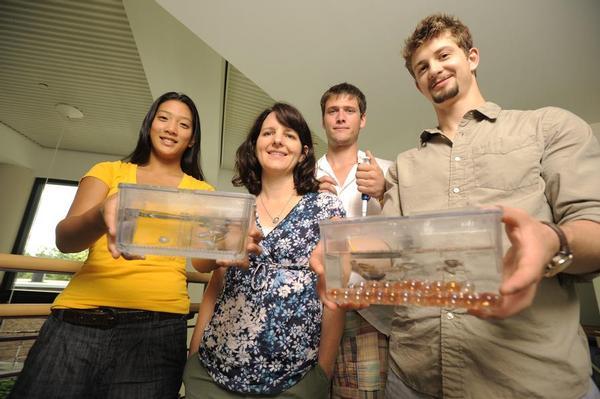 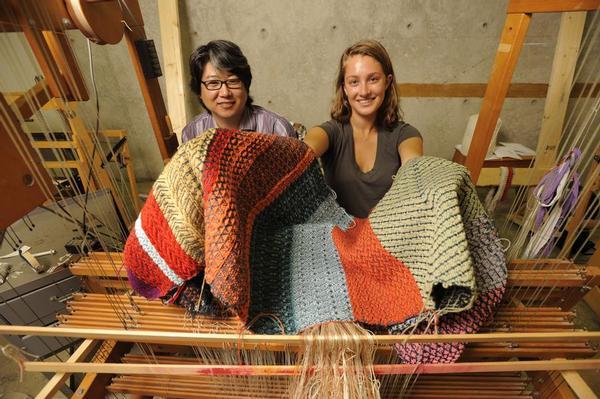 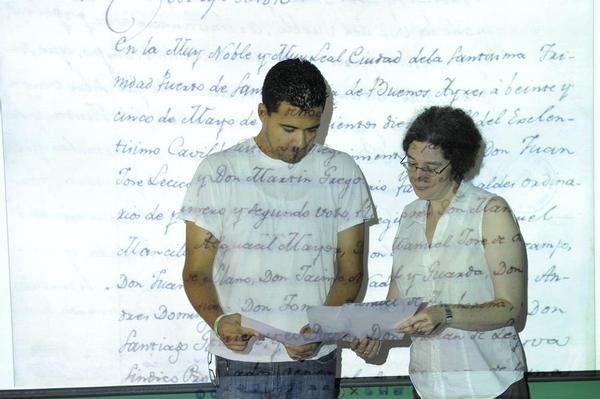 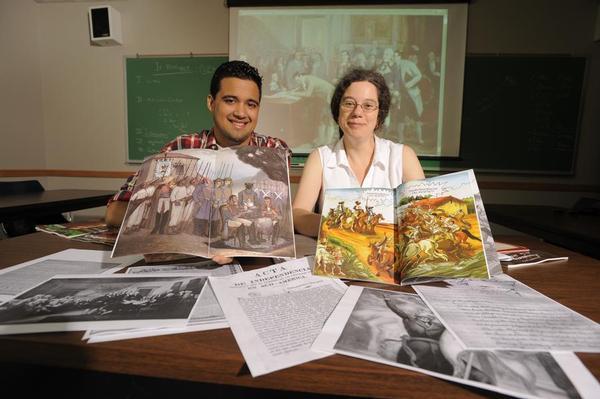 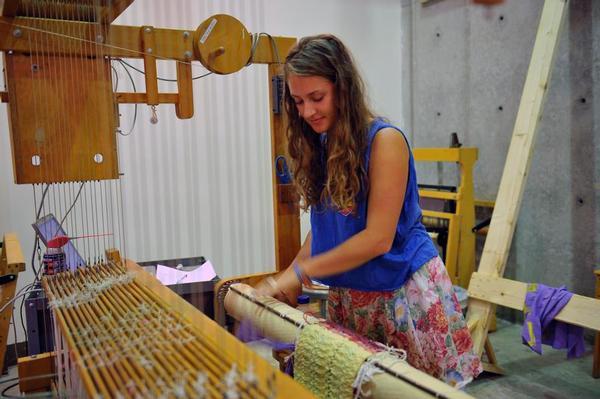 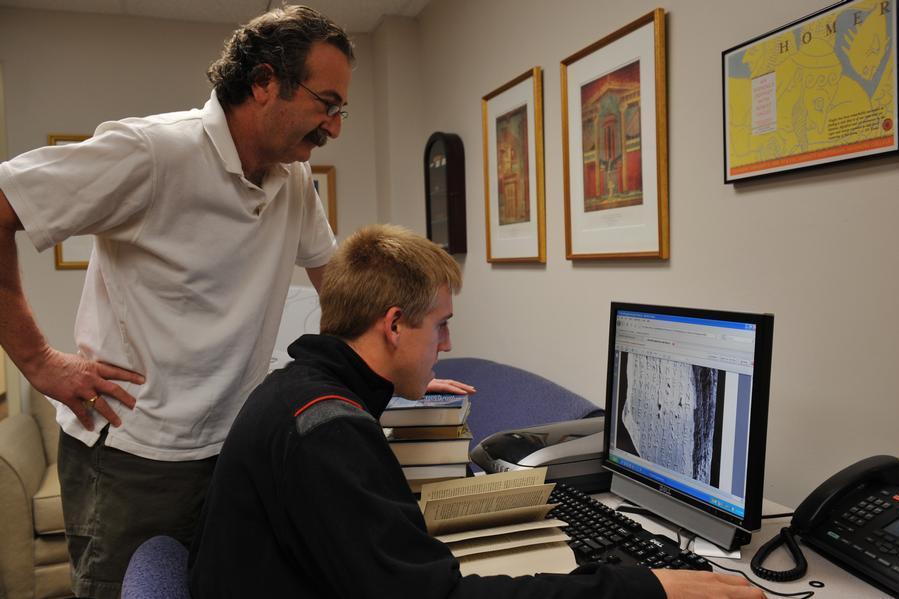 Eighty students, 40 faculty, and 45 projects involving countless computers, many microscopes, and one digital loom. It’s summer, and collaborative research is under way in labs and studios across Skidmore College.

The topics under study encompass a wide range of interests and disciplines. One common denominator is the interest level of the student scholars and their excitement for conducting and analyzing original research. You can find a full list of this year's collaborative research projects here.

Those at work include these teams featured in this portfolio:

21st-century tech meets ancient Greek text. Classicist Michael Arnush and Ross Jaffe, Class of 2011, are creating an open-source textbook of Greek manuscripts in a new Web-based language. The final result will be a first-of-its-kind attempt to combine Greek texts, English translations, and linguistic and historical commentary in one medium accessible to all audiences.

Alcohol’s effects on nerve-system development. Biologist Jennifer Bonner and three students—Andrew Ross, Class of 2012, and Cecilia Culp and Aleksander Krazinski, both Class of 2011—are studying a gene that guides nerve development in embryos. By adding ethanol and charting the nerve’s growth path, they’re modeling fetal alcohol syndrome—all courtesy of approximately 500 fertile zebrafish. This team is sponsored by the Weg Scholars fund, established in 2010 by Carol Little Weg '64 and Ken Weg and awarded with a preference to students pursuing projects in the sciences and social sciences.

Computer-dobby textile weaving. Fiber artist Sang Wook Lee and Victoria Manganiello, Class of 2012 have repaired a 30-year-old digitally guided dobby loom, which Maganiello is using to create original designs influenced by her early June visit to the Otavalo region in (Ecuador, where she explored the rich textiles culture and (learned more about the juxtaposition of art and function.

Declarations of independence in Latin America. Historian Jordana Dym and Randy Abreu, Class of 2011, are comparing the wording, emphases, and nuances in more than a dozen declarations of independence from Central and South America. Their work is being used by the national archives of Mexico for an exhibition marking this fall’s bicentennial of its official rejection of Spanish rule.

Green plant cell functions and operations. Biologist David Domozych and Korena Burgio, Class of 2011, are studying “transformation strategies” in a popular new lab model of a simple green plant, the one-celled alga Penium margaritaceum. The project is using a range of cell- and molecular-bio technologies to investigate how the plant secretes pectin to build and modify its cell walls. This team is sponsored by the Weg Scholars fund, established in 2010 by Carol Little Weg '64 and Ken Weg and awarded with a preference to students pursuing projects in the sciences and social sciences.

Perception, memory, and the mind’s eye. Pyschologist Hugh Foley—with Beiwen Zhu, Maggie Luckhard, and Mila Woodfield, all Class of 2012 (plus Isabel Cain ’12 and Jaruda Ithisuphalap ’13, not pictured)—is probing the way people often report having seen complete images although they were shown partially masked ones and also how people often recall wider backgrounds for images they actually saw in closeup. After experiments with 40 volunteers, they hope to clarify differences in the two kinds of (mis)perception. This team is sponsored by the Axelrod-Porges Scholars fund, established in 2006 by Felicia Axelrod '62 and Robert Porges to support faculty-student teams in the area of the sciences.