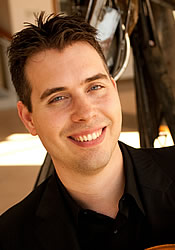 Jonathan is the founding cellist of the Hyperion String Quartet. With the quartet, he won prizes at the Coleman, Fischoff, Green Lake, and Music Teachers National Association chamber music competitions. As a soloist, he was awarded the first place Arden J. Yockey Scholarship for Strings in the Tuesday Musical’s 2003 Competition in Akron, Ohio.

He has appeared as a soloist with the Onondaga Civic Orchestra, the Syracuse University Summer Festival Orchestra and the Kent State University Orchestra. Jonathan has also served as guest cellist with the Miró Quartet and has been guest principal cello with Orchestra New England. As a sought after chamber musician, he has appeared at festivals including La Jolla Chamber Music Society’s Summerfest, Penderecki QuartetFest, Bravo Vail Valley Festival and Strings in the Mountains. He has collaborated with many artists including Benny Kim, Toby Appel, Sophie Shao, Melvin Chen, Stewart Rose, Stephen Taylor, Anthea Kreston and with members of the Miró, Penderecki and Rossetti string quartets. He is currently a member of the Lake Placid Sinfonietta, the Vermont Symphony Orchestra and is principal of the Glens Falls Symphony Orchestra.

As an educator, Jonathan has served on the faculty at the NSOA-ASTA Conference at SUNY Fredonia, the Hartt School Community Division, Connecticut College, and the Lake George Chamber Music Workshop, and is currently on faculty at The College of Saint Rose, Skidmore College and SUNY Adirondack in upstate New York. He completed his undergraduate studies at the Eastman School of Music with high honors and earned his Master of Music degree from Kent State University as a teaching assistant to the Miró and Miami string quartets. His principal teachers were Einar Holm, Steven Doane, Joshua Gindele and Keith Robinson. Other mentors include William Stokking, Rosemary Elliott, and Kathleen Kemp.

Jonathan lives in Saratoga Springs with his wife, violinist Amanda Brin and their three children Annabelle, Elliott, and Oliver, and in his spare time he enjoys grilling when it is warm enough, or whenever he can shovel a clear spot in the driveway during the winter.